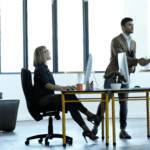 Agilent Technologies is an American public research, development and manufacturing company established in 1999 as a spin-off from Hewlett Packard. The company provides analytical instruments, software, services and consumables for the entire laboratory workflow.

“I don’t usually take cold calls, but this one was just too good to pass up,” says Lewis Meline, workplace services and multi-site manager at Agilent Technologies in Roseville.

Agilent Technologies, like most progressive companies, has a corporate philosophy that encourages its locations to look for ways to reduce energy and water consumption to lower its environmental footprint and operating and maintenance costs. When it comes to energy consumption, lighting is an excellent place to capture immediate savings.

“I was immediately sold by the new Enlighted Inc. control system because it’s a program that gives me complete flexibility to control all of the lighting systems at our facility and reduce our lighting energy consumption up to 90 percent in some cases.”

The new Enlighted control system gives Meline control over the 50,000 square feet of office and lab lighting because lights can be programmed to turn off and on during certain times, at very specific intervals, at different ambient levels and with varying levels of sensitivity which helps lower energy consumption.

“Before we installed the new lighting system, I would come into my office on some weekends and all 50,000 square feet of lights would pop on… it was a huge waste,” says Meline. “Now, with the new sensors and dimmable ballasts, only a few lights turn on along my path, allowing me to complete my duties without using a whole lot of energy.” More than 400 fixtures were updated with dimming ballasts and motion sensors replacing the 14 large lighting zones that existed before and creating hundreds of much smaller, more manageable “zones” of space to actively manage. In addition to the sensors and dimming ballasts, the system also features photo sensors to provide daylight harvesting options and temperature controls, giving facility managers the ability to program and customize very specific lighting levels for employees at desks, offices and labs throughout the building.

The investment in the new lighting system installed in March has already demonstrated its value. Along with the flexible programming settings, the software includes an energy manager, giving Meline the ability to generate energy savings and consumption reports for the corporate office or participate in Roseville Electric’s demand response program. “I look for energy saving investments that pay for themselves and pay quickly,” says Meline. “This system, when compared to the one we had before, has demonstrated an average of 58 percent energy savings in lighting efficiency.”

The Enlighted Inc. control system reduces Agilent Technology’s lighting costs by approximately 20 percent on weekdays and more than 90 percent on weekends. These reductions equate to the system paying for itself in less than 24 months, making every dollar saved after that pure energy profits. The money that was once spent on energy bills can now be spent elsewhere – most likely on additional energy and water efficiency programs and projects. In addition to the cost savings realized in energy efficiency, Meline expects maintenance costs to drop by approximately 25 percent. That includes changing lamps and ballasts because they will burn out less often.

“The total cost of our lighting retrofit project was approximately $70,000 and we received $4,800 of that from Roseville Electric to help with this customized project,” says Meline. Agilent Technologies total energy savings after completing the project was an 8kW drop in peak demand charges and more than 100,000 fewer kWh per year.

“I would recommend anyone considering a lighting or building energy efficiency project to connect with their local electric utility provider to see if they offer incentives. I was fortunate to work directly with Kris Blair, a key account representative at Roseville Electric – as she was instrumental in helping us secure the money and move forward.”

A suite of tools for design, quote, and order requests

The brightest way to operate, orchestrate and optimize everyday spaces.

Get in touch with an Enlighted expert

Get in Touch with Enlighted
An Enlighted partner will get back to you within 24 hours.
We use cookies on our website as described in our Privacy Policy, to enhance your browsing experience and we process personal information in the United States which, for users outside the United States, may have a lower standard of data privacy laws compared to your country of residence. Click Accept to confirm your acceptance to our use of cookies. By continuing to use the website you are deemed to have consented to our use of cookies and through our Terms of Use. ACCEPT